Twenty years ago, I lived in the Caucasus and often visited Azerbaijan’s capital Baku on the Caspian shore. In those chaotic post-Soviet years — ethnic wars, flatline economies, not much electricity — you could buy half a kilo of unctuous grey-black caviar for 50 bucks in the market.

There was an American-style diner that served an all-you-can-eat buffet brunch at the weekend: eggs, bacon, sausages, pancakes, and a large bowl of communal caviar for $10. Once, I brought back a whole kilo to London to make caviar sandwiches. We munched them — somewhat sheepishly, I remember — at half-time at Villa Park, watching Arsenal lose to Manchester United in an FA Cup semi-final replay. It must have been 1999.

Basically, I ate the last of the world’s wild caviar. (The real stuff: the black-grey roe of the sturgeon, harvested from fish caught in the sea and not farmed in river pens or artificial ponds.) After the Soviet Union collapsed in the early 1990s, poaching and pollution destroyed sturgeon stocks in the Caspian.

In the mid-1990s, the Convention on International Trade in Endangered Species began to impose steadily constricting quotas; in 2006, it recommended a complete ban on commercial fishing for sturgeon in the Caspian. Prices skyrocketed.

Since then, sturgeon farms have been established in the US, France, Bulgaria, Italy, Israel, Madagascar and even Saudi Arabia. Perhaps unsurprisingly, China now produces most of the world’s caviar and estimates of the value of the global caviar market vary between $350m and $500m.

Caviar prices have always been slippery but before the Soviet Union broke up, the price for ossetra (good quality caviar, but not the premium beluga) was about $1,000 a kilo. Today, it’s between $2,500 and $3,500.

While it’s true that the global tonnage of caviar now produced — about 350 tonnes — is far less than was hauled out of the Caspian 30 years ago when it was virtually the only source, the Soviets’ command economy, their virtual monopoly on caviar exports and desire for hard currency meant the price had little to do with supply and demand. So, as the supply of farmed caviar keeps on rising, I’m wondering: why is the price still so high?

Last autumn, I met Armen Petrossian for lunch at his eponymous restaurant in Paris. He is a dapper gentleman, who speaks English, French and Russian. He wore a bow tie and sported a waxed moustache. His father and his uncle, Armenian émigrés, did more than anyone to create the mystique of caviar as the food of emperors and kings, when they established the first great caviar emporium in Paris in the 1920s.

Today, Petrossian is one of the largest buyers and retailers of caviar in the world. “I like to think of myself as Mr 10 per cent,” he laughed, referring to another famous Armenian, Calouste Gulbenkian, who was known as Mr 5 per cent for the share he took of the Caspian’s other great black resource, oil, when he brokered for the Nobel brothers during Baku’s oil boom in the early 20th century.

On the table before me were six caviar spoons, loaded with mouthfuls of three kinds of caviar, Lauren, baïka, and osetra, from three species of sturgeon. “Your palate must adjust,” said Petrossian, encouraging me to try the baïka, from the Siberian sturgeon, first. It was fish jam, slightly metallic; the taste ended quickly and left no memory. “Yes,” Petrossian agreed, shaking his head, “smaller grains, a rather short taste, it doesn’t last.”

The larger grains of the Lauren, a hybrid of two Amur sturgeon — the huge river fish, Huso Mauritius, and the smaller Acipenser schrenckii — made a squish of resistance against my teeth and the familiar sweetly rich umami swirled in the back of my throat. The asset had a softer texture but a more complex taste of dark velvet sea under the moonlight and something else, curious and indefinable.

Amazingly, Petrossian explained, when first harvested, sturgeon eggs “have a sort of milk taste, it’s not agreeable at all, it’s lactic, like eating old yogurt. Then you add salt, which makes them salty.” Traditionally, a tiny quantity of borax, a mineral salt used in industry, and an ingredient in detergents (but banned as a food additive in the US) are used as a preservative.

The real flavor of caviar is developed by maturation, in the same way as wine or beef or cheese. It is kept in several-kilo tins and turned regularly for at least one month and up to 18. The amount of time, Petrossian told me, tapping the side of his nose, “is based on human taste”.

How would you rate your dog’s training on a scale from 1 to 10? The chances are, you didn’t rank your best furry friend a 10. Why is that? The simple … END_OF_DOCUMENT_TOKEN_TO_BE_REPLACED

The world of crowdfunding is exploding in popularity. Take a look at just a few of these statistics: In North America alone, more than $17 … END_OF_DOCUMENT_TOKEN_TO_BE_REPLACED 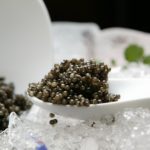 Twenty years ago, I lived in the Caucasus and often visited Azerbaijan’s capital Baku on the Caspian shore. In those chaotic post-Soviet years — … END_OF_DOCUMENT_TOKEN_TO_BE_REPLACED